Cultura- Curiosità: Who doesn’t know the typical Chianti fiasco? Together with , red and white check tableclothes, pizza, vespa and the Coliseum, it has become a symbol all over the world.

The glass flask has its origin in the Tuscan countryside.  Originally green,  this glass, at first discovered by the Phoenicians, is composed by a grinded mix of silica sand, calcium carbonate, sodium sulfate and charcoal thoroughly mixed. 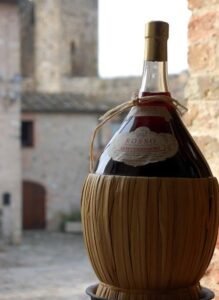 It appears that the idea of the “fiasco” came up when a clever glassmaker decided to wrap up the funny shaped green bottle with marsh plants to keep the temperature of the wine content during transport as well as to reduce the chances of braking it .We do not know exactly its “date of birth” but it definitely occurred before the fifteenth century. Marsh plants where then substituted by straw as we know now and thi object really goes back in time.   In the Florentine church of San Martino, in a fresco attributed to Ghirlandaio, a fiasco is clearly visible and in 1447, documents show the mother of Lorenzo de ‘Medici sending him letters with details of shipping of fiasco bottles with red wine from Poggibonsi and Colle.

Castelfiorentino, in Tuscany, is the original home of “fiascaie“, slang name used for the women who, by  using scissors and needles, spent hours and hours to cover the green bottles for wine with straw previously collected along the river banks. The women used to work in their own homes or in special rooms rented as a group.  During the  summer months, they used to work outside in the streets , or just outside their homes, working late until the day light faded away while gossiping about the village life. It was a typical women work and a really good way to spend time together and  share experiences and talks or…as we say in Italian: “un momento di aggregazione”

Far from the story of the bottle , the expression “Fare fiasco” in Italian has become  an way of saying , meaning to fail and  it comes from the theatrical world as sometimes happens at the end of a show that doesn’t haveany success. All this actually refers to a real  episode that took place around  1600s and it happened to the unfortunate Bolognese actor Domenico Biancolelli. The “ sfortunato attore”  passed into history as one of the most famous Arlecchino. He had the unfortunate  ( sfortunata) idea of ​​inventing a monologue that had as its theme the “fiasco”, understood as an object; unfortunately he did not make anyone laugh and, since then, the term “fiasco” became synonymous with “failure” in Italian : fallimento / insuccesso.

I do love the rustic Chianti red wine in its traditional Fiasco bottle.

It makes me think of cozy meals with family and friends with no etiquette and laughs and “chiacchiere a non finire “(endless chit chat) .