ITALIANO IN GELATERIA : No one wants to be unprepared in front of an inviting ice cream shop (GELATERIA) in Italy!

Gelato’s origins  are partly strictly linked to Tuscany and we really have a great list of BEST PLACES where to eat the most amazing GELATO in the region.

But how to ask for it?

VORREI UN GELATO  is I would like an ice cream, please.

CHE GUSTI? ( What flavour?) In Italy you don’t ask for scoops , rather for GUSTI : UN GUSTO, DUE / TRE GUSTI…or you state how much you want to spend.: VORREI UN GELATO DA 2 EURO / DA 3 EURO…. 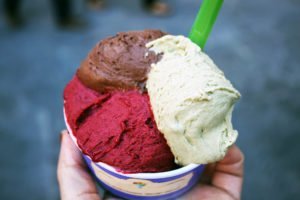 QUANTI GUSTI? –How many flavors? CREME o FRUTTA? ( CREME being all the milk based types versus the fruit selection)

Among CREME you’ll find IL GETTONATISSIMO CIOCCOLATO (colloquial way to say “ very popular, , from GETTONE –  token, previously used for payment with automatic machines, it has become a way of saying to indicate something very much in demand), LA NOCCIOLA – Hazelnut , an evergreen NELLA CLASSIFICA DEI GELATI . 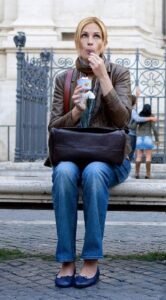 With the new generation of flavors you have to familiarize with many different CIOCCOLATO types: CIOCCOLATO ALL’ARANCIO ( orange flavoured chocolate) , ALLA CANNELLA ( with cinnamon) & AL PEPERONCINO ( with chilly-pepper) as well as the gentle MANDORLA – Almond or the acidulo YOGURT (sour yogurt)

COSA PREFERITE ? – What do you prefer? CONO o COPPETTA?

Do you know that the cone, made of a  crispy wafer, is also an italian idea? read mora about it here . 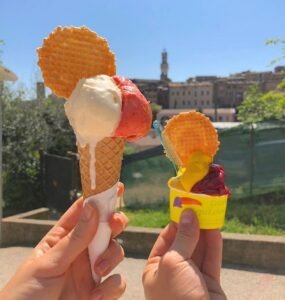 Whatever you choose enjoy  it!  GELATO ARTIGIANALE e Gelato INDUSTRIALE are worlds apart and if you have tried my Gelato Tour with Gelato Tasting you know what I mean! 😉